This Vanilla Bread Pudding is the perfect easy dessert to serve to a crowd or just for two! This boozy bread pudding has the perfect blend of spices and is topped with a scoop of ice cream and a splash of vanilla-flavored tequila.

Bread pudding has been a favorite dessert of mine for quite some time.

I think it started when I first had it at the restaurant I worked at in college. My time as a server there really opened my eyes to so many new foods and luckily, bread pudding was one of them.

It makes a lot of sense that I’d like bread pudding. It’s almost like French toast, which happens to be my favorite breakfast in the world. I can bet that your French toast doesn’t have tequila in it.

If you’ve been around the last few months, you know that each month I join my blogger besties and we create a boozy recipe that we all share on the same day.

When we started discussing this month’s, we decided that boozy desserts would be perfect for the fall. At the time, I had just gotten back from my anniversary trip to Cabo where I discovered vanilla tequila.

Actually, I discovered it for the second time. About three years ago, my mom and I went to Cancun together and attended a tequila tasting where we had vanilla tequila for the first time.

I was skeptical about buying some to bring home and decided against it — big mistake. I’ve wanted it ever since. So three years later when I came across it again, I had to buy it.

So I knew that I wanted to use the vanilla tequila in a boozy dessert recipe and the idea for bread pudding popped in my head.

When we were in Cabo, the tequila tour guide mentioned pouring this vanilla tequila directly on top of a scoop of ice cream.

It reminded me of affogato, where you pour espresso over ice cream, and it sounded like the perfect way to top an already delicious bread pudding. It also reminds me of caramel budino, AKA Italian pudding, which is made with rum.

The entire bread pudding is sweet, a bit spicy from the tequila, and purely delicious. I could see this being the perfect individual dessert for a small party or even making a bigger batch to serve for a holiday dessert.

How much alcohol is in Tequila Bread Pudding?

Although this dessert is technically boozy, the majority of the booziness is baked in, like vodka pie crust.

So if you can’t have alcohol or choose not to, you can easily omit the splash of tequila on top and you’ll have a dessert with boozy flavor without the actual alcohol.

How to make Vanilla Tequila

If you don’t want to fly to Mexico to get vanilla tequila (but why not?!) you can make your own. It’s a lot like making homemade vanilla vodka.

Mix 1 teaspoon vanilla extract with 1 cup of blanco tequila. You should also sweeten it with 2 tablespoons simple syrup.

While we’re in the spirit for boozy desserts, you have to try these yummy things:

Ready to make your own boozy bread pudding? Let’s dig in!

Replace tequila with heavy cream for a non-alcoholic version. 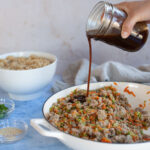 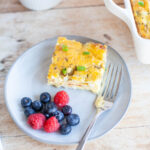 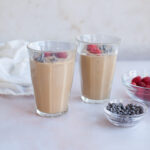